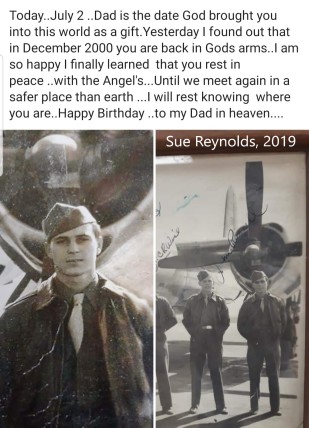 She is acting up tonight. Granted we had a rough time last night, and an overly complicated day, but I really can’t handle her fears, on top of my own anxiety.
I whispered to her, “Behave, little one. Please.”
The day began with a phone call from my younger sister.
We have been looking for my dad, a mentally ill, homeless, alcoholic for over thirty years. Checking for at least a death certificate, looking for closure.
My sister has had contacts in the military looking for any information for over a year and today, on Dad’s birthday, she received the information.
Dad is dead. He died alone and homeless in 2000. Buried in a poverty grave by the military.
It hit me hard, even though I had felt that he was gone, I was never sure.
My sister has his Death Certificate and his military records, and we now know where he is buried. The military is even going to put a marker on his grave.
The inner child, She, is taking it much harder than me and while closure is a relief, it’s a rough time to throw more grief into our fragile infrastructure.
Right after I heard the news about my dad, I had an appointment with a local domestic violence shelter and showing up was one of the hardest things I’ve ever done. I can admit to my family and my friends, my readers and myself that I have suffered and accepted abuse but reaching out to total strangers for a support group has taken me almost a year.
I made the appointment the day before my house sold and I decided to go anyway, if only for an exercise in courage and to give them a copy of my book, Women Who Think Too Much. https://books2read.com/u/md0J5d
Well, they can’t give out their address, so they gave me a meet point and told me to call them when I arrived. I made it there ten minutes before my appointment and called them. No answer.
I started to panic, but I took a deep breath and I prayed. I managed to sit there for forty minutes, calling back every five minutes. Never got an answer.
I left there disappointed, but so proud that I had overcome the anxiety to show up. She even stayed calm, which was surprising. I think she was mourning Dad and wandering in her own little world.